The thumper keg is an intrinsic part of the small-scale distillation process. While traditionally jerry-rigged, this piece of equipment is now mass-produced and commercially available. But what is a thumper keg, and how does it work?

The thumper keg is a cheaper alternative to having multiple stills and more complicated distilling equipment. A thumper keg is used to reduce the amount of water in distilled liquid. In producing alcoholic beverages and spirits, it’s used to increase the alcohol content.

This article will explore the function and use of thumper kegs. But first, we’ll explain how distilled beverages are produced.

How Distilled Beverages Are Made

Distillation is the separation of component liquids in a mixture through selective boiling and condensation. It takes advantage of the differing vaporization temperatures of different molecules.

Shaker & Spoon - We bring the bar to you! It's the perfect home happy hour🍸→ Get Your Drink Box

Distillation is performed by heating a volume of mixed fluids to the boiling point of one of them. If one or more fluids in a mixture have a lower boiling point and the mixture is heated to that temperature, the constituent fluid(s) with the lower boiling point will evaporate. The hot vapor can then be cooled, condensed, and collected to produce a purified form of that liquid.

The alcohol in alcoholic beverages is produced by microscopic single-celled yeast, relatives of fungi. The yeast used in alcohol production is closely related to bread leaven. They can actually be used interchangeably.

Under normal conditions, yeast ingests and metabolizes sugar and releases carbon dioxide, among other metabolic wastes. That’s essentially how human metabolism works as well. But when yeast is placed in an oxygen-deficient environment, they switch to a different metabolic process called “fermentation.”

Fermentation uses a different and less energy-efficient enzyme path to break down sugar into more simple molecules. The important part is the ultimate byproduct of fermentation: ethanol.

The container is closed once the yeast is introduced. The yeast multiplies rapidly and soon exhausts the oxygen left in the container when it starts fermenting. Fermentation is often accelerated by heating the container.

Fermentation is a self-destructive survival strategy for yeast. Brewers’ yeast can only tolerate an alcohol concentration between 6% and 15%. When the alcohol level in the wort nears or exceeds the yeast’s alcohol tolerance, it either dies or goes into an inactive state.

What happens now depends on what alcoholic beverage the producer is trying to make. Wine, beer, and malt liquor producers filter the now ethanol-infused wort/must to remove leftover solids and yeast and bottle the remaining distilled spirit as their finished product. Spirit producers distill the wort to extract the alcohol.

In the spirit industry, the fermented wort is called “wash.”

Once the wort/must is fermented, the alcohol has to be extracted. This is done through distillation.

The wash is transferred into a container called a still. Stills were traditionally made out of easily workable copper, but most modern stills are stainless steel. Copper stills are still used by some small-scale and tradition-minded distillers.

Once full of wash, the still is heated. Ethanol boils at 173.1°F (78.39°C), but water boils at 212°F (100°C). As long as the internal temperature of the still is kept between those two temperatures, the ethanol will boil out of the wort while most of the water stays behind.

The ethanol vapor is then routed into a condenser (usually copper tubing) when it condenses into its liquid state. The leftover wort/must is discarded, often sold to farmers as animal feed. The condensed liquid is called the “distillate.”

There are two primary types of still used in alcohol fermentation, pot stills, and column stills. Pot stills are related to this article’s topic.

Pot stills were originally invented in the late 8th century CE as a development of an older distilling apparatus called the alembic. Most flavored beverages like whiskey, tequila, rum, brandy, and vodka are distilled in pot stills.

Pot stills are used for batch distillation, in which a set volume of wort can be distilled at any one time. When distillation is over, the still must be cleaned out and refilled with wort.

Pot stills produce a distillate with an alcohol concentration between 25% and 35% alcohol, with the remainder consisting of water and other impurities, referred to as “congeners.” Congeners are mostly metabolic byproducts produced by yeast during fermentation and are the primary cause of hangovers. The distillate produced from the first distillation is called “low wine.”

Low wine can be run through additional distillations but will top out at an alcohol concentration between 60% and 80% alcohol. Industrial alcohol distillers use multiple sets of massive pot stills or column stills to enable constant production.

What Is a Thumper Keg?

A thumper keg is a simplified secondary still to extract higher alcohol concentrations. But instead of using a separate heat source, a thumper keg uses the waste heat carried in the low wine vapor.

The historical origin of the thumper keg isn’t clear. It was brought to North America by Northern European colonists, possibly the Scotch Irish, sometime before the American Revolution. It’s possible those who invented it were illiterate, which would explain the lack of documentation.

A thump keg can be made of any heat-resistant container. It should be ⅓ the size of your pot still. Mass-produced microdistilling systems often feature thumper kegs made of glass, copper, or stainless steel.

A thumper keg should be no more than ⅔ full of some alcohol-based liquid. Many micro distillers and moonshiners use low wine, wash, or finished spirit. You can use water, although that would defeat the purpose.

Low wine vapor is piped out of the still into the thumper keg and ends below the surface of the liquid in the keg. A second pipe leads from the thumper keg to the condenser.

How Does a Thumper Keg Work?

A common setup for microdistilling and moonshining has three parts, the pot still, the thumper keg, and the condenser. The condenser, often called the “worm” by moonshiners, is typically a section of coiled metal copper tubing which ends in a final collection container. As the name implies, the condenser converts the final vapor from gas to a liquid.

The liquid in the keg is quickly heated to the boiling point of alcohol by the injected vapor. Ethanol evaporates, leaving behind water and congeners. The thumper keg vapor is then condensed and collected in a final container.

Some micro distillers and moonshine makers also use the thumper keg to infuse their spirit with flavor by placing fruit, herbs, and other agents in the thumper keg. Sources differ on whether this works.

Why Is It Called the “Thumper Keg”?

It’s called the thumper keg because it thumps. The thumping is caused by backpressure between the still and the keg. Because the pipe feeding the low wine vapor into the keg ends below the fluid line, pressure builds up in the pipe and still.

When enough pressure builds up to force the liquid out of the pipe, the pressure is released in the form of a large bubble. The pressure release makes the whole keg shake.

How Do I Get a Thumper Keg?

Traditionally, thumper kegs were jerry-rigged from an existing container and piping. Any premade container can work as long as the materials can withstand the temperatures and pressures involved and don’t contain any lead.

Modern micro distillers and moonshiners use mason jars, carboys, or even buckets.

The other requirement for a homemade thumper keg is to have an airtight lid with airtight seals around the places where the pipes enter the keg. Modern silicone seals work the best.

But if you don’t want to build your thumper keg, you can buy one online as a kit or fully assembled. In fact, over a dozen types of microdistilling setups are available for between $80 and $500. 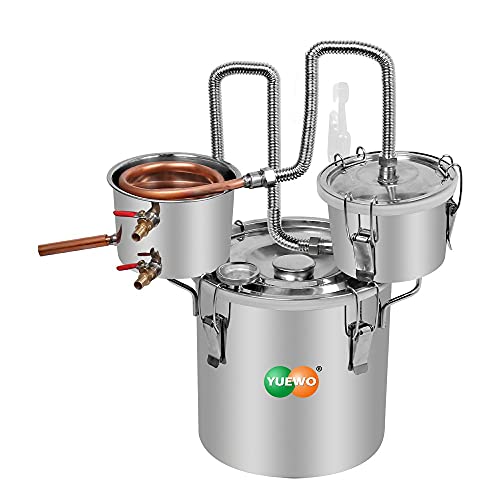 Pictured above is a ready to go (Amazon). It’s a pot still, thumper keg, and condenser all in one which makes it easier to use. This one uses a flame, such as from a stovetop burner, as a heating source.

Many models available today, however, use electric heating elements instead of the traditional open flame. For obvious reasons, electric heating is considerably safer. Alcohol vapor is extremely flammable.

Check out this video below to learn a whole lot more about Thumpers:

Thumper kegs use waste heat to redistill the low wine produced by a pot still into a high-proof spirit. You can make one with parts from your local hardware store or buy one over the internet.

Shaker & Spoon - We bring the bar to you! It's the perfect home happy hour🍸→ Get Your Drink Box