If you have a bunch of beer at home in the refrigerator, you may want to know how long it lasts so that it doesn’t go to waste! Beer can go bad, but it may take longer than you think. Many beers can last well beyond their expiration date.

Beer can last for at least one year when in the fridge. This is usually well beyond the expiration date. Several other factors, such as whether the beer is in a can or bottle, also play a factor in determining how long beer will last in your fridge.

Knowing how long your brew will last helps you choose what and how much to buy. Keep reading and I’ll explore how long beer will last in your fridge in more detail, plus I’ll explain why you can keep beer past the expiration date, and much more.

Contents show
1 How Long Beer Lasts in the Fridge
1.1 How Long Do Vintage Beers Last
2 Understanding Beer Expiration Dates
3 What Can Make Beer Go Bad
3.1 Signs That Your Beer Has Gone Bad
4 How To Store Beer Properly
5 Can Expired Beer Make You Sick?
6 Final Thoughts

How Long Beer Lasts in the Fridge

Even if it is stored at room temperature, beer can last for as long as six months before going bad. However, simply moving your beer to the fridge can help it stay consumable for at least an entire year past the expiration date. Additionally, some brands can even stay fresh for up to two years if stored properly in the fridge.

There are several different factors that can impact shelf life. One of the most significant is whether or not the beer is bottled. Canned beer lasts a lot longer than bottled beer because the can prevents light from reaching the beer. Cans also have a strong, airtight seal, keeping the flavor in and bacteria out.

Over time, you can expect the flavor of your beer to change. The beer will go rancid quickly especially if you’ve opened the container because air and bacteria will interact with the beer.

How Long Do Vintage Beers Last

While regular beer can last for a long time, vintage beers actually tend to last even longer! Brewers produce these beers with long-term storage in mind, so you can store them for five to ten years without worrying about them going bad. How long vintage beers can be stored depends on how the beer was made and how it is stored, plus the brewer will usually provide you with a clear indication of when you can expect it to go bad.

Many food products contain a use-by date on their packaging. These labels include information on when the food was prepared and packaged, so you can tell at a glance if it’s still fresh. In the case of beer, it sometimes has a use-by date stamped somewhere on the bottle or can but not always.

However, beer doesn’t expire directly on the use-by date, so you don’t need to toss out those old beers just yet!

Stored beer can last for several months after the expiration date on their packaging. Brewers often list the use-by date earlier than it needs to be to ensure their customers are always satisfied with the taste. However, drinking beer a few days or months after the date shouldn’t affect the taste.

Many beers can last far beyond their expiration date. As a general rule, beer stored at room temperature lasts six months past the printed date, and refrigerating your beer allows it to last up to two years past the use-by date.

What Can Make Beer Go Bad

If you want to make your stored beer last as long as possible, you should first understand why it goes bad. Beer is made of plant materials, which can decay. To keep it tasting fresh, you’ll need to store beer properly.

There are three elements that can cause your beer (and any other food items) to expire early:

These elements can cause the beer to age faster, which also means it can spoil a lot more quickly. If you want to store the beer for the future, you need to ensure you put it somewhere; it won’t go bad in the meantime!

Luckily, you can easily avoid all of these elements by storing your beer in the fridge. It’s cool and dark there, with minimal airflow, allowing the beverages to last a long time.

Signs That Your Beer Has Gone Bad

It’s not smart to drink sour beer, and it’s not going to taste good either! You’ll want to watch out for the signs that your beer has gone bad. These signs include:

If your beer has gone bad, it’s best to throw it away. Spoiled beer contains bacteria, which can affect its flavor and may even make you sick. If the beer has recently expired, you won’t have to worry about falling ill, but the taste will likely be enough for you to toss it in the nearest trash can.

How To Store Beer Properly

If you want your beer to hold onto its flavor profile for a long time, here’s how you can store it to ensure you’ll be able to drink it without issue months down the road: 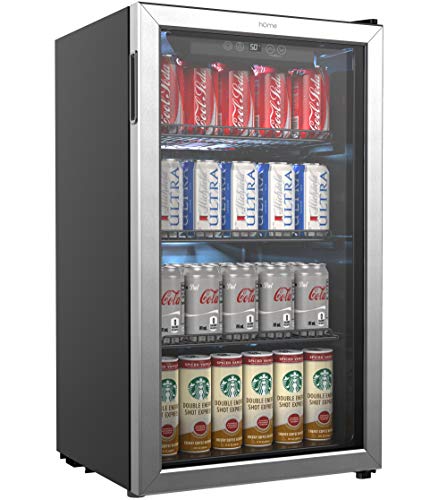 If you don’t have the perfect place to keep your beer at home, you can consider buying a beer fridge. I recommend checking out the from Amazon. It can hold up to 120 cans of beer, offers reliable temperature controls, and has an automatic defrosting mode. If you want to keep plenty of beer on hand, this will keep it fresh for a very long time!

Can Expired Beer Make You Sick?

If you do have an expired beer at home, you may worry that drinking it will make you ill. While beer stays fresh in the fridge for much longer than the expiry date, people still worry they’ll drink it, only to be struck by an awful bout of food poisoning.

Expired beer shouldn’t make you sick, although it might taste a bit stale or lack flavor. At most, you may experience a slight stomach ache, but nothing serious. However, if your beer has visible signs that it is going bad rather than just being beyond its expiry date, it’s time to throw it out.

If you have pasteurized beer, that means the brewer sterilized it before you bought it. These types of beers are much less likely to contain bacteria, reducing the chance of them going bad. However, you’ll need to pay more attention to the expiration dates if you have an unpasteurized beer.

The best way to avoid expired beer tasting bad is to store it in the fridge. That way, you have about two years to drink it, instead of just six months.

Even if you haven’t stored your beer properly, you should be able to drink it a few weeks or even months after the expiry date without worrying about falling ill.

That said, if it’s too far past its use-by date and hasn’t been stored properly, it’s likely gone bad. This also applies to refrigerated beer that has been sitting in your fridge for 3+ years.

If you open a can of beer and the smell indicates that the beer has gone bad, you’ll need to get rid of it ASAP. While expired beer may not make you ill, a beer that’s gone completely bad (and smells skunky and tastes very sour, like cabbage or sewage) will probably leave you feeling sick because of the smell and taste.

Beer stored at room temperature will only last about six months past the listed expiration date. However, a beer you keep in the fridge can last for as much as four times longer! For those who want to make their beer last for a good long time, it’s best to keep it cool in the fridge.

Keeping your beer cold prevents it from spoiling early. If you don’t have enough space in your refrigerator, you can also look into buying a dedicated beer fridge for your house.